1, in the field of water treatment

as the deoxidant of boiler water and oilfield flooding;

as antichlor for municipal and industrial water;

as the raw material for the production of sodium thiosulfate;

as the stabilizer of viscose acetal fibre;

as the bactericide of beer bottle.

2, in food industry: as bleaching agent, preservative, bulking agent, antioxidant and for the medicine synthesis

3, as analytical reagent, light dependent resistor materials and base solution of polarographic analysis

4, as antioxygen of cosmetics, mainly for hair dye cosmetics

5, as reducing agent of spice, dye and so on

6, in textile industry: as bleacher and deoxidier for fabric

Sodium sulfite forms a bisulfite adduct with aldehydes, and with ketones forms a sulfonic acid. It is used to purify or isolate aldehydes and ketones.
Sodium sulfite (sodium sulphite) is a soluble sodium salt of sulfurous acid (sulfite) with the chemical formula Na2SO3. It is a product of sulfur dioxide scrubbing, a part of the flue-gas desulfurization process. It is also used as a preservative to prevent dried fruit from discoloring, and for preserving meats, and is used in the same way as sodium thiosulfate to convert elemental halogens to their respective hydrohalic acids, in photographyand for reducing chlorine levels in pools.
Sodium Sulfite is a white crystal or powder with reducing property. Sodium sulfite exhibits bleaching, de-sulfurizing, and dechlorinating activities. This agent was used by food industry to help maintain the fresh appearance of food products. It is also a component in many drugs, which helps maintain their potency and stability. FDA has ruled sodium sulfite a new animal drug of low regulatory priority.
SODIUM SULFITE is a white odorless powder. Density 2.633 g / cm3. Moderately toxic. Sinks in water and dissolves slowly. Also transported as a heptahydrate Na2SO3.7H2O. 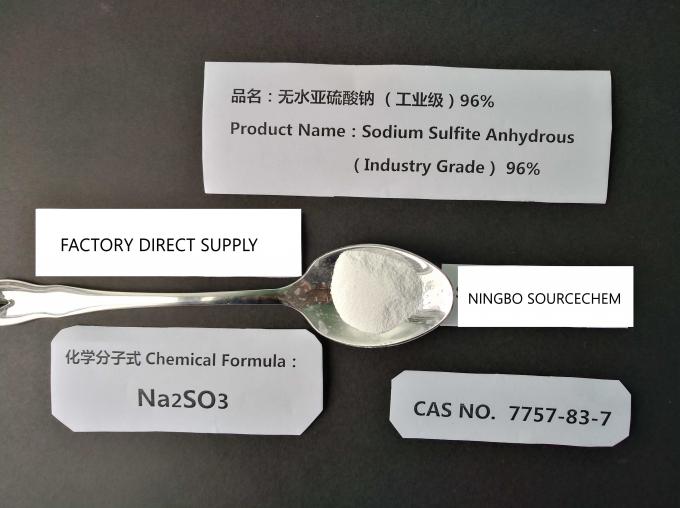