Phosphorous acid is the compound described by the formula H3PO3. This acid is diprotic (readily ionizes two protons), not triprotic as might be suggested by this formula. Phosphorous acid is an intermediate in the preparation of other phosphorus compounds.Product Applications

H3PO3 is more clearly described with the structural formula HPO(OH)2. In the solid state, HP(O)(OH)2 is tetrahedral with one shorter P=O bond of 148 pm and two longer P–O(H) bonds of 154 pm. This species exists in equilibrium with an extremely minor tautomer P(OH)3. IUPAC recommends that the latter be called phosphorous acid, whereas the dihydroxy form is called phosphonic acid.[2] Only the reduced phosphorus compounds are spelled with an "ous" ending.
Other important oxyacids of phosphorus are phosphoric acid (H3PO4) and hypophosphorous acid (H3PO2). The reduced phosphorus acids are subject to similar tautomerism involving shifts of H between O and P. 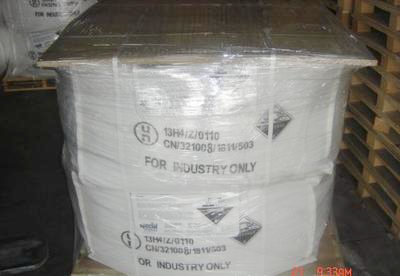 HPO(OH)2 is the product of the hydrolysis of its acid anhydride:
P4O6 + 6 H2O → 4 HPO(OH)2
(An analogous relationship connects H3PO4 and P4O10).
On an industrial scale, the acid is prepared by hydrolysis of phosphorus trichloride with water or steam:[3]
PCl3 + 3 H2O → HPO(OH)2 + 3 HCl
Potassium phosphite is also a convenient precursor to phosphorous acid:
K2HPO3 + 2 HCl → 2 KCl + H3PO3
In practice aqueous potassium phosphite is treated with excess hydrochloric acid. By concentrating the solution and precipitations with alcohols, the pure acid can be separated from the salt.

Phosphorous acid is a strong acid with a pKa in the range 1.26–1.3.[4][5]
HP(O)(OH)2 → HP(O)2(OH)− + H+ pKa = 1.3
It is a diprotic acid, the hydrogenphosphite ion, HP(O)2(OH)− is a moderately strong acid:
HP(O)2(OH)− → HPO32− + H+ pKa = 6.7
The conjugate base HP(O)2(OH)− is called hydrogen phosphite, and the second conjugate base, HPO2−
3, is the phosphite ion.[6] (Note that the IUPAC recommendations are hydrogen phosphonate and phosphonate respectively).
The hydrogen bonded directly to the phosphorus atom is not readily ionizable. Chemistry examinations often test students' appreciation of the fact that not all three hydrogen atoms are acidic under aqueous conditions, in contrast with H3PO4.

On heating at 200 °C, phosphorous acid disproportionates to phosphoric acid and phosphine:[7]
4 H3PO3 → 3 H3PO4 + PH3
This reaction is used for laboratory-scale preparations of PH3.

The most important use of phosphorous acid (phosphonic acid) is the production of basic lead phosphite, which is a stabilizer in PVC and related chlorinated polymers.[3]
Phosphites have shown effectiveness in controlling a variety of plant diseases, in particular, treatment using either trunk injection or foliar containing phosphorous acid salts is indicated in response to infections by phytophthora and pythium-type plant pathogens (both within class oomycetes, known as water molds), such as dieback/root rot and downy mildew.[10] Anti-microbial products containing salts of phosphorous acid are marketed in Australia as 'Yates Anti-Rot'; and in the United States of America, for example, aluminum salts of the monoethyl ester of phosphorous acid (known generically as 'Fosetyl-Al') are sold under the trade name 'Aliette'. Phosphorous acid and its salts, unlike phosphoric acid, are somewhat toxic and should be handled carefully.

The IUPAC (mostly organic) name is phosphonic acid. This nomenclature is commonly reserved for substituted derivatives, that is, organic group bonded to phosphorus, not simply an ester. For example, (CH3)PO(OH)2 is "methylphosphonic acid", which may of course form "methylphosphonate" esters.